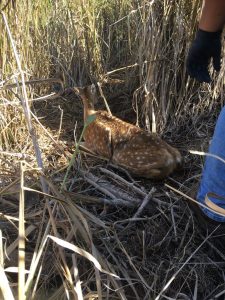 The Hawaiʻi Department of Agriculture, Animal Industry Division received calls from Molokaʻi residents regarding large numbers of axis deer dying on the West End of Molokaʻi during the latter part of 2020 and early 2021.  Veterinary Medical Officer, Dr. Naomi Kamakau-Sakugawa, was dispatched from Maui on December 28, 2020 to investigate these losses.

Dr. Kamakau-Sakugawa responded to several reports of large quantities of axis deer found dead throughout Maunaloa town, Kaluakoi Resort, and on the side of roads throughout the West End of Molokaʻi.  Her investigation was to determine if causes other than the severe drought and starvation might have been contributing to the die-off.

Dr. Kamakau-Sakugawa assessed the environment and habitat conditions on the West End of Molokaʻi, euthanized, and conducted field necropsies on eight randomly selected poor doing axis deer.   Visual assessment west of the airport indicated that the area was experiencing severe drought conditions.  The ground was bare and devoid of any forage and leaves of plants/trees not normally consumed by deer were eaten. There were numerous deer carcasses discovered. The live deer seen were severely underweight and very weak. On examination and dissection of the eight axis deer, there was no gross evidence of an infectious cause for their condition, and they had significantly reduced amounts of muscle and fat consistent with the severe drought condition.

Multiple tissues and fluids from these axis deer were submitted to the Hawaiʻi State Veterinary Laboratory in Halawa and other Mainland various veterinary laboratories for additional testing.  Examination of tissues by the state, federal, and university laboratories confirmed that infectious diseases were not the cause of the poor condition and deaths seen in the deer.  Specifically, the deer tested negative for tuberculosis, brucellosis, chronic wasting disease, and deer adenovirus.  Although some level of internal parasites are typically seen in domestic and wild animal populations, fecal examinations for intestinal parasites did not identify significant parasite burdens. Screening toxicology tests did not identify a causative toxicant and heavy metals and minerals were within expected reference ranges.  The reduced nutritional condition of these deer was substantiated with bone marrow fat analyses, which determined the percentage of fat in the bone marrow was approximately 10 % of what would be expected in normal deer.  The bone marrow fat analysis test is typically relied upon to determine if starvation is occurring.

Recent rainfall is resulting in regrowth of feed in the area and improved conditions and recovery of the deer population are expected.

Protects Hawaii’s livestock and poultry industries through the control and prevention of pests and diseases.

The Hawaii Department of Agriculture’s Division of Animal Industry is charged with the responsibility of safeguarding the State’s livestock and poultry industries by controlling and preventing the entry and spread of pests and diseases; operating the rabies quarantine program and the [...]