The Brown tree snake’s (Boiga irregularis) native range is eastern Indonesia, northern Australia, Papua New Guinea and the Solomon Islands. It arrived in Guam after World War II, probably as a stowaway in military cargo. Since the snake had no natural enemies on Guam, it has attained high population levels

It feeds on a wide variety of birds, mammals and lizards. Nine species of birds have been wiped out on Guam due to predation by the snake. They also have caused frequent islandwide power outages by climbing utility poles and shorting out electrical lines. This snake represents one of the greatest threats to Hawaii’s native species. Since 1981, eight brown tree snakes have been found on Oahu. 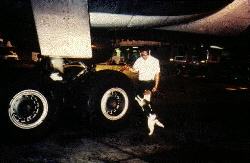 Through state and federal funding, multi-agency “Rapid Response” teams have been training periodically in Guam to be able to respond to possible sightings of brown tree snakes in Hawaii.

To report a sighting of a snake or any illegal animal, please call the state’s toll-free PEST HOTLINE at 643-PEST (7378)