On June 27, 2014, a multi-agency crew of about 20 people scoured a Mililani Mauka neighborhood after residents turned in the stinging little fire ants (LFA) to the Hawaii Department of Agriculture on June 18 and 23.  The team set out to methodically survey homes and surrounding areas using peanut butter as bait for the LFA.  Crews smeared a little peanut butter in plastic vials and dropped them around yards.  After about one hour, the vials were collected and each vial was logged by a wristwatch type Global Positioning Satellite (GPS) technology. The data will be downloaded and mapped.

Unfortunately, the surveys already showed that the infestation in the neighborhood appears to be very large and that a gully area in the back of the homes is also infested and LFA has encroached into the neighborhood across the gully. More surveys are necessary to determine the exact extent of the infestation. It is not known at this time how the LFA arrived in the area.

Residents say that the LFA has been in the area for at least four years. Most thought it was just another red ant and did not realize it was LFA.

LFA was first detected on Oahu in December 2013 at a retail store, several nurseries and landscaping businesses.  There is also a 6-acre non-residential area in Waimanalo that is currently being treated for LFA.  The Mililani situation is the first time LFA has been reported in a residential area. We appreciate the cooperation of the residents in the area.

Homeowners on Oahu and Maui are urged to test their homes and yards for LFA by using peanut butter on a chopstick and freezing any ants before sending the sample to HDOA for analysis. It is important that you contact HDOA if you think you have LFA so we can develop a plan for your neighborhood. Those who have family members who are allergic to peanut butter may use a piece of luncheon meat as a bait. Instructions and an instructional video on how to conduct the baiting is available on the HDOA website at:  http://hdoa.hawaii.gov/pi/main/lfainfo/

If you have any questions regarding LFA, please contact the HDOA Chemical/Mechanical Control Section at: (808) 973-9538 or e-mail:  [email protected] 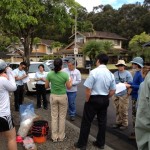 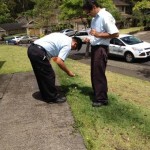 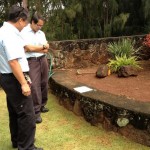 The vials are left for about 1 hour. 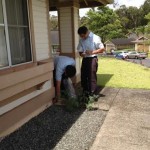 Looking for ant pathways to test. 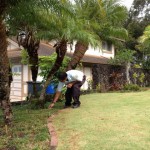 LFA shady areas and in trees. 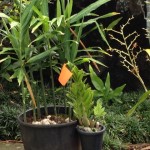 Flags mark the spot where bait was placed. 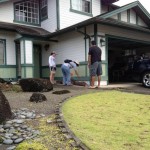 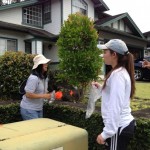 Warm areas like an electrical transformer may also attract LFA. 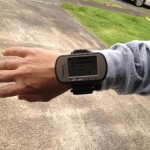 GPS wristwatch logs the spot where samples are collected. 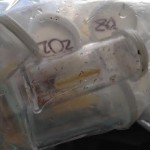 Vials are collected and will be analyzed back at the lab. 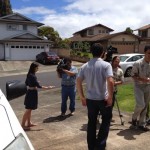