HONOLULU — In the month of May 2014, the Hawaii Department of Agriculture (HDOA) captured nine coqui have been captured on Oahu.

“We appreciate the efforts of those who have reported hearing the coqui and their cooperation,” said Scott Enright, chairperson of the Hawaii Board of Agriculture. “We need everyone’s help to detect them so we can eradicate this and other invasive species that may harm our agriculture and eco-system.”

Suspected invasive species should be reported immediately to the state’s toll-free PEST HOTLINE – 643-PEST (7378). To hear what a coqui frog sounds like, go to: http://www.hear.org/AlienSpeciesInHawaii/species/frogs/ 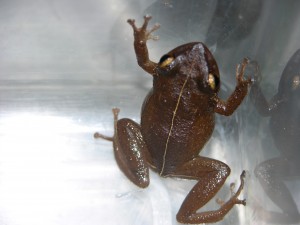